One Page: An Anti-Fascist Hero You Probably Don’t Know

Most people walk by the plaque on the corner of 5th Avenue and 15th Street in New York City without noticing it.  Even if they stopped to read it, they most likely would not know that it commemorates a historical event which rocked New York City in 1943.

At 9:40 p.m. on Monday, January 11th, someone fired a bullet into the back of Carlo Tresca’s head, killing him instantly.

Carlo knew a bullet would find him soon enough.  He was a realist who knew his luck would evaporate someday.  He had escaped several assassination attempts and still he had not backed down from the fight.  His enemies were powerful and dangerous–Communists, Stalinists, and fascists from around the globe.  He even joked about his death to the distress of his friends, united by their fierce loyalty and devotion to him and the anti-fascist cause.

A Hero Nobody Remembers

Tresca is a little-known hero today, but for decades he was a giant, famous for his labor organizing, outspoken and independent opinions, his love of good food, his loyalty to friends, and his unfailing sense of justice for the underdog in society.  He recognized the danger of fascism early on and used his newspaper Il Martello, to drive home the point about its insidiousness.

For those of us who are inclined to pigeonhole our political leaders by party affiliations, Tresca is an enigma.  A six-foot tall Italian immigrant who was fond of wearing cowboy hats, Tresca was trained as an accountant and fought for the working class.  He was not beyond admitting he was wrong in supporting a philosophy or a leader.  He was a contradiction:  a one-time Communist who turned anti-Stalinist.  He was an anarchist firebrand, who had friends on both sides of the political aisle, and yet he was optimistic, gregarious, and polite–even to the police.  Above all else, he was loyal to his wide circle friends, who included writers, activists, and politicians, such as Emma Goldman, John Dos Passos, Max Eastman, and Elizabeth Gurley Flynn.

Friends with the Police

Here’s a vignette about Tresca that will give you a clearer sense of who he was.  Of course, the quote is quintessential Tresca. 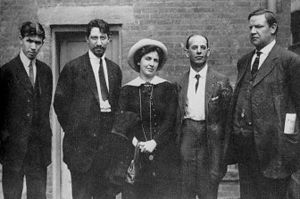 After the terrorist explosion on Wall Street in 1920,  the cops started stopping by his office on 16th Street to ask him what he knew about other incidents.  Reporters asked him what he thought about these visits from the police.  “They are nice boys,” Tresca said. “Whenever there is a bomb, they come to me. They ask me what I know, but I never know anything. So we have wine.”  (Source:  The New York Daily News.)

Decades later, his murder is still unsolved, but the evidence strongly supports the opinion that Tresca was killed by Carmine Gallante, who had ties to the Italian mob.  But who hired Gallante?  Some believe it was the Communists.  Others believe it was Generoso Pope, the publisher of the pro-fascist newspaper, Il Progresso.  Others insist it was Benito Mussolini, whose feud with Tresca started when they both were young radicals in Italy.  In fact, Mussolini put him on a death list in 1931.

Tresca and Mussolini  had met back in Italy.  The confrontation between them was very telling.  After a night of political debating, the younger Mussolini declared “Well Tresca, I am sure that in America you will become a true revolutionary comrade.”

Tresca reportedly fired back, “I hope, Comrade Mussolini, that you’ll quit posing and learn how to fight.”

Divisiveness and political infighting are nothing new in American politics.  Political factions drove apart anti-fascist groups in the 1930’s and 1940’s and undermined their political effectiveness.  Today’s political environment is no different.  Politics is still a dangerous, bloody game.  But master politicians like Tresca seem sadly old-fashioned in a modern political arena filled with self-interest, self-aggrandisement, and posturing for political advancement.  No wonder why many of us are hoping for a political leader to emerge who inspires us, who holds fast to his/her ideals and reaches out to both sides of the political aisle. Is that too much to ask?  And so, for many of us, we still search for the dream leader like Tresca–principled, generous, and inspiring.

To Find Out More About Carlo Tresca:

Dorothy Gallagher.  All the Right Enemies:  The Life and Murder of Carlo Tresca.

This is the third post in a series called One Page, which highlights events from the past that resonate in today’s political climate.  To see other posts in this series, follow the links below.

Whispers, Lies and the Truth

A Quiz:  Do You Know These Fascists?